Sensitive Side of Sinatra

Home  /  Sensitive Side of Sinatra 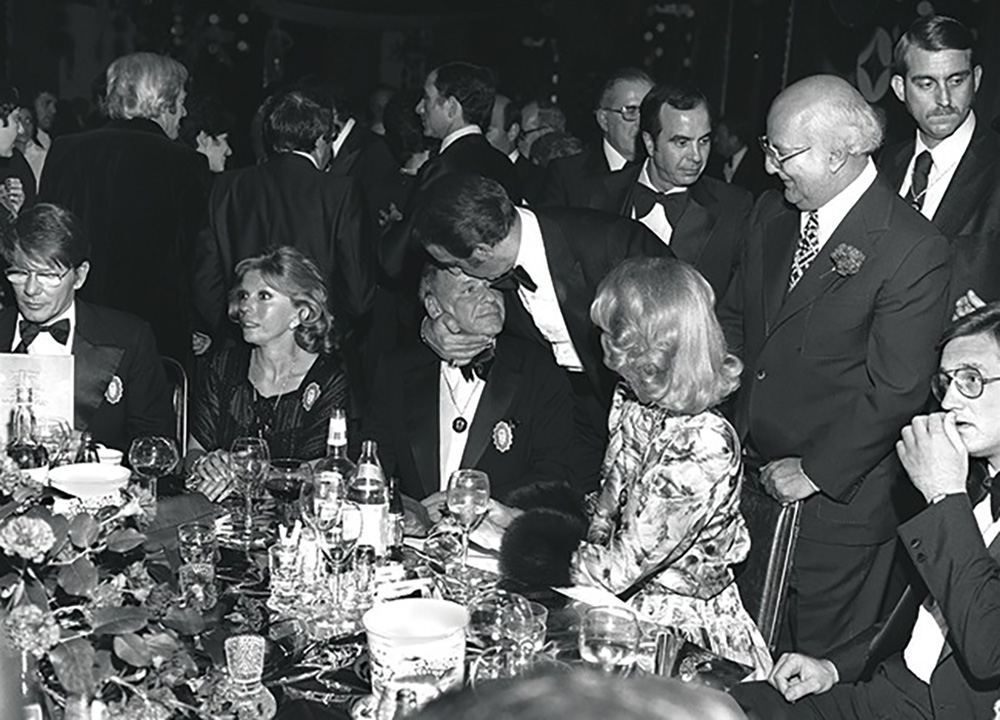 Some say it is the subject that makes the picture. Others believe it is the story told by the photographer. Yet for young stringers in the ’70s, whether it was a celebrity sighting, a prize fight or the president, they got paid $15 a photo and just hoped they got the shot.

Mostly, these independent photographers, working on contract for the Associated Press, hoped to add up enough images by the end of the month to make rent. Back then, Randy Tunnell was young, skilled and willing to take $15 for any gig that would put him at the scene. It was, after all, a numbers game, and half of it was being there.

Thirty-three years ago, Tunnell was dispatched to the Stardust Hotel in Las Vegas, where a gala was being hosted in memory of Frank Sinatra’s mother, Dolly, who had perished in a plane crash early that year. Surely the Rat Pack was there. And likely everyone else who held court with the crooner. The star wattage was high, and the atmosphere heady, as the self-proclaimed “punk photographer” studied the scene, looking for something to chronicle.

And then it happened. Sinatra, overcome by a cocktail of grief and gratitude, began to break down. Actor and comedian Danny Thomas cradled the tearful Sinatra’s head in his hand, bent down, and kissed him on the forehead. Tunnell released the shutter.

By today’s vernacular, the photograph “went viral,” moving quickly from national to worldwide exposure. Although Tunnell got his $15 for the picture, he didn’t own the photograph.

But he did retain ownership of the negative for that picture and every other shot he took that night and on other celebrity assignments for the AP.

“Of all the negatives I kept from that event, whether it was Tina Turner as she performed that night, or others, this one picture remains a favorite of mine,” said Tunnell, now a seasoned photographer who makes his home on the Monterey Peninsula with wife, singer-song writer Laura Dare, and their twin children. “It was such a sensitive, intimate peek into Frank Sinatra in a moment of vulnerability most had never seen before.”

While considering what to do with the image 30-plus years later, Tunnell was put in touch with Rich Pepe, who owns Little Napoli Bistro Italiano in Carmel. The restaurant, a microcosm of the culture, cuisine and traditions of Italy through the context of Pepe’s Hoboken, N.J., roots, is filled with black-and-white photographs portraying Pepe’s own family. Tunnell had no way of knowing his photograph was already part of the story.

“I’m originally from Hoboken, as was Frank Sinatra,” Pepe said. “My dad grew up with Frank; his mom and Frank’s mom, Dolly, were very close friends. They lived right around the corner from each other. Frank, being an only child, spent a lot of time at my father’s house. My dad had eight brothers and sisters, and there was always food on the table at my dad’s house. Frank’s parents were always working. Frank, as we all saw later, liked to be around people.

“Dolly was a midwife in Hoboken. She delivered my dad, all my dad’s brothers and sisters, and just about everybody else in Hoboken. When the Sinatras got a little more money in their pockets, they moved about four blocks up town. We’d walk past their house, and Dolly would be there, sitting on the stoop. She’d always ask after our family. After Frank moved away, he rarely came back to Hoboken, and even then, he’d sneak in. Finally he moved Dolly out to Palm Springs, and the plane accident happened not too long after that.”

For Pepe, Tunnell made a 3-foot-by-5-foot, black-and-white enlargement of the photograph from the Stardust Hotel, which was placed prominently among the family photos at Little Napoli last month.

“A continuous sound loop plays in the restaurant that is all Sinatra,” said Tunnell. “The place has a great vibe to it; perfect for that print. Because it is a table shot, restaurant guests sitting at their own table can look over to it, almost as if they’re dining with them. It’s a snapshot in time from that era.”

Pepe recently hosted a reception in the restaurant to celebrate the photograph and the stories behind it. Photography aficionado Rep. Sam Farr, D-Carmel, was present at the event.

“I’ve known Randy a long time,” said the congressman. “He took all the photographs for my campaign. A hobbyist photographer myself, Randy was telling me about this photo during the campaign, and I said I’d love to see it. I love the ambiance of the restaurant, and I find it interesting how Randy got just $15 for that photograph. I love photojournalism, and this is what Randy does. On that night, he captured the right moment, a time when Frank Sinatra had tears in his eyes.”

Pepe and Tunnell have been in touch with daughter Nancy Sinatra, also depicted in the photograph, to arrange a time when they can present her with a print of this image, along with others from that evening at the Stardust.

In the meantime, Tunnell has created a Sinatra Site, to which he will upload 20 narrative photographs from his Frank Sinatra “Tribute to Dolly” series, as well as many others, over time, to create a photojournalistic record of his early era of photography. Enter the password “pepe” and images will appear.  Subjects will include prize fighters Minnesota Fats, Mohammed Ali, Joe Louis Sugar Ray Leonard and other people of prominence whose stories he has captured over time.

“I’m really happy with the clientele I’m working with now,” said Tunnell, “including Community Hospital of the Monterey Peninsula, CSU Monterey Bay, the Leon Panetta Lecture Series, the Sam Farr political campaign, and the Monterey Bay Aquarium. I’m focusing on environmental portraiture and personal and publication photographs that tell the stories of individuals and where they are in their artistic, life and career paths.”

To see the Sinatra photograph at Little Napoli Italian Bistro, call 626-6335 or visit the restaurant on Dolores Street between Ocean and 7th avenues, Carmel.