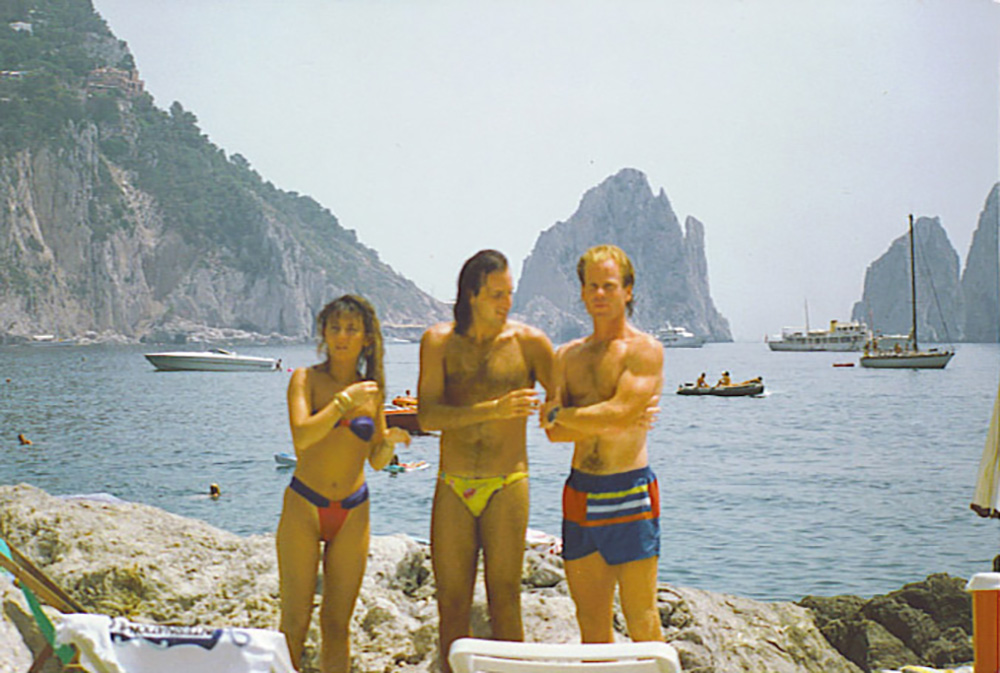 QUESTION:
This year my wife and I will celebrate our 25th anniversary. I’d like to celebrate this special time with a trip to Italy, as we are both of Italian decent. Can you suggest a place that would be the utmost in relaxation and celebration?

Buon anniversario!!! Congratulations on your anniversary and I wish you many more years of happiness to follow.

The Italian peninsula offers are wide variety of romantic, relaxing destinations to celebrate such an occasion. Places like Portofino, Positano, Lago di Como, Taormina (in summer), Cortina d’Ampezzo (in winter) come to mind immediately. But for me the best place I can recommend for this event is the Isle of Capri, famous the world over as a classy and beautiful romantic destination.

My first visit to Capri was in 1969 when I had just graduated high school (oops, did I just date myself?). After visiting our relatives in Napoli, my older brother and I were told we MUST visit Capri. It was a glorious time for us and our thoughts were…yes, we had arrived in the Italy we had always dreamed of.

There are few of your friends who won’t sigh and express their envy when you tell them of your plans to give each other the gift of Capri.

The Isle of Capri is located just across from Sorrento, on the southern side of the Gulf of Napoli. It has been a celebrated beauty spot and resort since the time of the Roman Republic. View of Beach at Capri

The privileged and powerful have been coming to Capri for two thousand years. The Emperor Augustus took a fancy to it, and traded it for the island of Ischia. His successor Tiberius made it his home when Rome became volatile and dangerous (which is what every Caesar had experienced). By all accounts he had a good time on Capri; if his Roman biographers are to be believed, he was up to all sorts of scandalous behavior on this beautiful island. You can still visit the ruins of his villas, and appreciate the spell that charmed the Emperors. Keep in mind that Capri lies just across the Bay of Naples and Pompeii, and you may have heard of the Roman orgies and debauchery that went on over there also.

During the Renaissance, artists, writers and poets and other presumably better-behaved inhabitants discovered the pleasures of Capri. And in the 19th Century the Romantics and Grand Tourists from England and other well-to-do northern European countries came to admire the island’s warm sun, cool sea breezes and rocky natural beauty. Gradually the island became established as a desirable holiday haunt for royalty and celebrities, a status it still holds today. The port at Marina Grande was built in the twentieth century and enabled the visitor numbers to increase, as tourism became the island’s chief industry.

In my generation, as Briget Bardot was strolling topless around the beaches of St. Tropez in the 60’s, Capri had Sophia Loren and Gina Lollobrigada to call its own. And once the world’s jet set heard that Jackie O. was frequenting the Island, Capri became the world capital of the Cafè Society: this is when the time of fashionable parties, gala dinners in fine eveningwear and ostentatious luxury began. And here, it is an undeclared PAPARAZZI-FREE ZONE, so everyone, including the celebrities, feels the unabashed freedom of expression, friendliness and creativity. Capri today has about 12,000 residents and is merely four square miles in area. Last year it received two million visitors, mostly day-trippers. Visitors love the combination of island simplicity, sparkling seas and dramatic cliffs complimented by luxury boutiques and busy glitz. And if you’re lucky enough to stay overnight, you’ll find a different Capri. After the last day trippers leave, a kind of exclusive peace settles over the island when the sun goes down as those who are privileged to be staying here emerge for dinner, followed by the passeggiata (evening stroll), or to sip their drinks and people-watch in Capri’s famous little square, La Piazzetta.

There are only two towns on Capri; Capri town itself, which is in the center of the island, and is where most of the hotels and shops are located, and Anacapri. Anacapri sits on the hill high above Capri, and is a quieter, less commercialized town, although you’re still not far from the hub of things, and there is a regular bus service. From Anacapri you can take the chairlift up to the top of Monte Solare and enjoy the views before the trip back down (on foot if you’re up for some exercise).

The principal Capri tourist attraction is the island itself; its views, its rocky seashores and its scenic charm. There is plenty of good walking – or strolling – to be done as you explore the island. Top scenic panoramas include views of the Bay of Naples, the Faraglioni Rocks and the Gardens of Augustus.

At the ruined Villa Jovis you can see the remains of the Emperor Tiberius’s palace, and also the cliffs over which he is reputed to have had his enemies tossed over. For shopaholics, Capri town is a dream, with all the big designer names and the exclusive and expensive boutiques. Almost every Capri visitor makes the trip to the Grotta Azzurra (Blue Grotto), the glowing blue-water cave that is an unforgettable experience. A boat trip around the island is also a rewarding experience. You can admire the coastline and the island’s other grottoes in a leisurely fashion. For over two thousand years, Capri has remained a much desired and dreamt of destination, and is still visited by tourists from all over the world. I believe that everyone who visits Capri would fulfill their own Italian dream and take home memories that will last a lifetime. Buon Viaggio!

Helpful Resources: please visit capri.com for all your travel and information needs. I found this website to be the most comprehensive and thorough resource available. Tomato and Mozzarella Salad
The Caprese Salad was created here on Capri, a combination of fresh mozzarella, vine-ripened island tomatoes, basil and extra-virgin olive oil and it is the perfect summertime dish. The salad was created in the 1950s at the Trattoria da Vincenzo for especially for regulars out for a light lunch. They’d order a salad of just-picked tomatoes and fresh fior di latte (cow’s-milk) mozzarella, topped off with hand-cut basil, extra-virgin olive oil and sea salt. The salad has now evolved on the island to include a few leaves of rughetta (wild arugula) and a pinch of dried wild oregano, both local products. The dressing is always a drizzle of extra-virgin olive oil – only. Vinegar would destroy the delicate flavor of the cheese and is never used. Because this salad is so simple, top quality ingredients are important. Limoncello is the famous drink developed here, using the flavorful skins of enormous lemons grown on the island. Interesting article on Limoncello.

Travel Notes & Tidbits: Capri is pronounced Cápri, using an soft accent on the first sylable.
The people who live on Capri are called Caprese.
Cars are not allowed on the Island, so you will have to leave your car in Napoli or in Sorrento near the port. I also advise to travel light, as carrying your luggage around is difficult (similar suggestions as for visiting Venice).

MISC: Capri pants, the mid-calf summer pants, were designed here in the 1950’s.

JUST FOR FUN: In the early 90’s I was in Capri with friends pictured in the photo below. In this photo, there are two Italians and one American. Can you guess which one is the American? If you guess correctly I will send you a $25.00 GIFT CARD to my restaurant in Carmel-by-the-Sea, CA, Little Napoli Bistro Italiano.
Send entries to: pepe@chefpepe.com

Rich Pèpe brings to this column his expertise in the Italian food, wine and travel industry. Click on a logo below to view some of Pèpe’s other ventures.