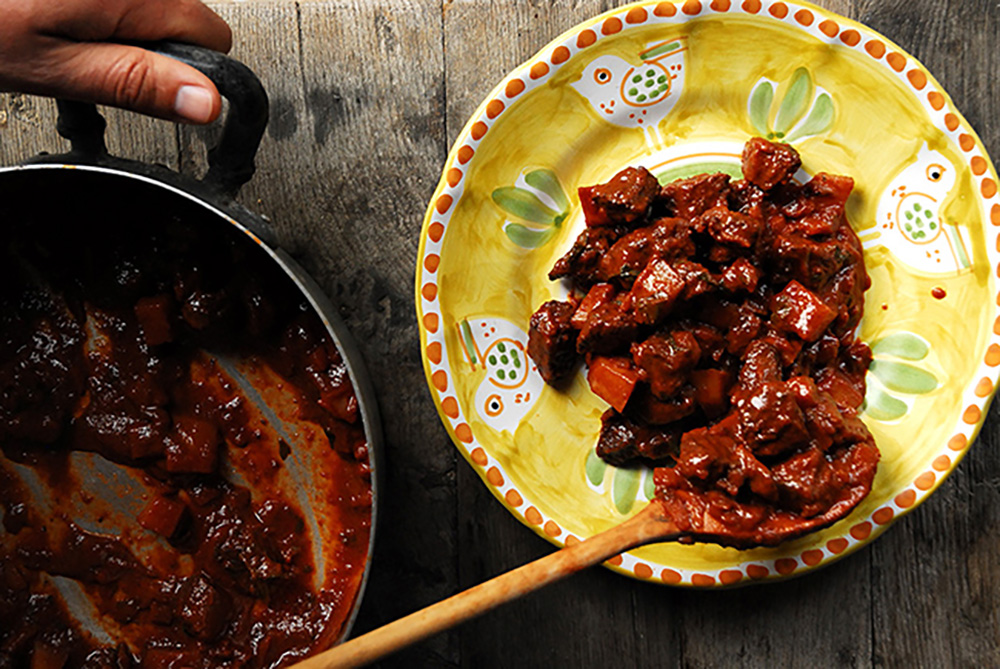 This month’s question asked about the use of black pepper in Italian cooking. First of all, I know a little about “pepper”. My name is Pèpe, which means pepper in Italian. All my life I have been nicknamed something to do with that word: Pep, Peppolino, Pepperoni, Sergeant Pepper, Dr. Pepper, Pepster…you name it. But as the old saying goes, “call me anything, but don’t call me late for dinner”.

QUESTION:
Here in America I see today’s chefs put salt and black pepper on EVERYTHING! But yet when I travel abroad, I rarely see black pepper used much at all, especially in Italy. And growing up Italian-American, I don’t remember my mom and grandmothers using it much either. What’s the real story? Chili peppers originally grew in Americas, but spread around the world after the discovery of the New World by Christopher Columbus

True, American chefs use salt and black pepper on virtually everything and it is too bad that this is just plain boring and not the reality of true Italian cooking. Italian cooking is all about the purity of each ingredient, and additional salt, pepper, and spices are used sparingly. During the Renaissance there was a hefty tax on salt as it was so scarce; therefore, many provinces adapted their cuisine accordingly, using salt only as a preservative. In Tuscany even today, much of the bread is still salt-free, but is enjoyed with sharp cheeses and salty prosciutto and salumi, which then all create a perfect harmony. When Italians do use salt it is of high quality and almost always a natural sea salt.

Black pepper was used in Roman times and up to the Renaissance period to often cover up the off flavors of rotten food and was certainly not used by the wealthy. Italians love spicy foods, but now the spice comes from red chili pepper, not black pepper. After Cristoforo Columbo (AKA Christopher Columbus) brought red peppers back from the New World, Italy in particular, switched their love of pepper from black to red.  If you do see black pepper used today, it will be in very specific dishes and always coarsely chopped. In my region of Campania, there is a wonderful dish called Spaghetti Cacio e Pepe (pasta with a sharp sheep’s milk cheese and black pepper). In Tuscany, there is a centuries-old beef stew dish called Peposo (see recipe below), which uses an extreme amount of black pepper, which in the past would have hidden the bad taste of old beef or mutton or the added spice would help keep you warm on chilly winter nights. Today, all of a sudden, these dishes are becoming fashionable, as the peasant dishes of old, known as Cucina Povera, are now back in vogue. Dario Cecchini, the Michelangelo of Meat

Italians today use many other ingredients to spice up their food and see no reason to add much black pepper. Their olive oils are even generally very spicy, as are some of the regional wines, such as sangiovese. Even Italian veggies come with their own spice profile; such as radicchio, broccoli rabe and chicory, not to mention many of the wild field greens that are so spicy they can almost burn your mouth.

To prove my point at the famed Buca Lapi in Florence, Chef Luciano carefully carves four-to-five inch Bistecca alla Fiorentina (Porterhouse Steak) and cooks them over olive wood coals with no seasoning until cooked, and then only coarse sea salt and spicy extra-virgin olive oil is added. No sauces to adulterate the flavors of the prized Chianina meat as the juices of the meat and the olive oil create a most perfect sauce. Nearby in Panzano at Dario Cecchini’s Officina della Bistecca, the chef uses on his steaks a pulverized blend of salt and aromatic herbs, such as sage, thyme, lavender, rosemary, bay laurel, fennel pollen and juniper berries which he calls “Profumo del Chianti”; again you can see there is no black pepper used at all.

Who needs black pepper when we there are so many more interesting ways to “kick up” the flavors of your food? Here is my recipe for Tuscan Peppery Beef  Stew

Peposo: Tuscan Peppery Beef Stew (serves 4) This dish called peposo is a meltingly tender stew, made more interesting by the large quantities of black pepper that season it. This recipe dates back to the Renaissance and before Columbus’ discovery of red pepper in the New World. Legend has it that this simple but very hearty dish was prepared by the stone masons who worked round-the-clock on Brunelleschi’s dome in Florence. In giant earthenware pots they would place chunks of cheap cuts of meat, loads of black pepper, spicy field herbs, apples or pears depending on the season to sweeten it up a bit, and cover it all with chianti wine. They’d push the pots into the oven that was used to bake the terracotta bricks that were needed to build on the dome cathedral.

Traditionally, peposo is served with crusts of country bread to absorb the meat juices, but it’s also very good served over steamed or boiled potatoes. This dish is normally not served with pasta.

DIRECTIONS:
In a bowl, blend together the carrot, onion, celery, parsley, garlic, basil, thyme, mint, and rosemary.In an ovenproof pot or Dutch oven, heat 2 tablespoons of the olive oil and stir in the minced vegetables and herbs and sauté them, stirring occasionally until they soften, but do not let them burn. Transfer the ingredients to a dish and set aside. Dry the meat with paper towels and rub with salt and black pepper. Add the remaining olive oil to the pan over medium heat and add the bay leaf and meat and sauté, turning the meat frequently to brown it. Add the wine to deglaze the pot and bring to a simmer. Add the beef broth and bring to a simmer. Return the vegetable mixture to the pan and stir in the lemon zest. Tightly cover the pot and bake in pre-heated 300ºF. oven for 2 hours.

After 2 hours, stir in the minced or pureed pears (or apples). Add more red wine or broth is necessary. Cover the pot and bake for an additional 1 hour. Remove from oven and adjust salt if necessary. Add a drizzle of Extra-Virgin Olive Oil on top and recover to cool down and rest.

Let stew cool down in the covered pot for at least ½ hour or it may become dry. This stew can be prepared in advance and also be refrigerated for several days. Serve with crusty bread or simple boiled or roasted potatoes.

WINE SELECTION:
To compliment this dish I suggest a white wine with a lot of mineral quality such as a Greco di Tufo or Fiano di Avellino from the Campania region.  A white wine with the hearty meat dish might sound strange at first, but because of the large amount of black pepper, you will need a wine that is palate-cleansing and soothing to refresh your taste buds. Or, if you’d prefer to enjoy this dish as the Renaissance stone masons did, then by all means open a nice bottle of chianti classic and imagine you are back in time 500 years ago…